Irving calls itself the “Headquarters of Headquarters,” and with good reason. Irving’s Las Colinas development is a magnet for Fortune 500 and Fortune 1000 corporate HQs, with more headquarters per capita than any other city.

In 2019, Irving reinforced its title when McKesson Corp., the nation’s largest pharmaceutical distributor, moved its headquarters from San Francisco to Las Colinas.

More headquarters wins for Irving are likely in the pipeline. The city is currently working with more than 80 companies interested in relocating to or expanding into that city, according to Beth Bowman, president and CEO of the Irving-Las Colinas Chamber of Commerce and Irving Economic Development Partnership.

McKesson has become the second-largest company by revenue to be based in North Texas, behind Exxon-Mobil and just ahead of AT&T Inc.

McKesson is not new to the North Texas corporate landscape. The pharmaceuticals powerhouse expanded its operations in North Texas in 2016, thanks in part to $9.75 million in incentives from the state’s Texas Enterprise Zone. There was no new TEF incentive for the headquarters move, said John Wittman, a spokesman for Gov. Greg Abbott.

McKesson also received $2 million in incentives from Irving for the 2016 expansion and job creation. The company said in a statement that it will not receive additional local incentives for moving the headquarters.

McKesson’s campus in Las Colinas opened with about 1,000 jobs and has grown to about 1,600 employees.

“We are excited to strengthen our presence in Texas and make Las Colinas our official global headquarters,” John Hammergren, McKesson’s then-chairman and CEO, said at the time. “Governor Abbott and the Irving/Las Colinas community have provided tremendous support since we opened our Las Colinas campus last April. Making this move will improve efficiency, collaboration and cost-competitiveness, while providing an exceptional work environment for our employees.”

Abbott said he is “delighted” with McKesson’s decision.

“The company has a long record of success in our state,” the governor said in a prepared statement. “McKesson’s expansion is an example of the kind of high-quality companies and jobs Texas has attracted as a result of our focus on economic growth, and I am proud to welcome them to the Lone Star State.”

McKesson’s Las Colinas campus has been a key hub for the company, where employees work in the company’s operations, information technology, finance and accounting, marketing and sales, administration and support, purchasing, and project management departments. 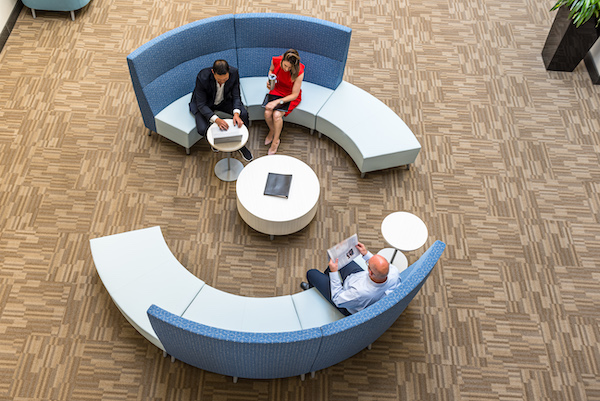 “The company has a long record of success in our state,” the governor said in a prepared statement. “McKesson’s expansion is an example of the kind of high-quality companies and jobs Texas has attracted as a result of our focus on economic growth, and I am proud to welcome them to the Lone Star State.”

McKesson’s Las Colinas campus has been a key hub for the company, where employees work in the company’s operations, information technology, finance and accounting, marketing and sales, administration and support, purchasing, and project management departments.

As the company shifts its headquarters to the campus, it said it will continue to keep a strong presence in California. More than 1,400 employees, primarily in distribution and sales, will remain in the Golden State. Earlier in 2018, McKesson opened a distribution center for its medical-surgical division in Roseville, California.

McKesson Ventures will also remain in San Francisco, along with a technology development team for the company’s U.S. Oncology Network.

The move to North Texas supports a multi-year strategic growth initiative announced in April 2018, McKesson said. The initiative includes plans to optimize McKesson’s operating and cost structures, and it’s expected to generate $300 million to $400 million in annual pre-tax gross savings by the end of fiscal year 2021.

“As part of our strategic growth initiative, we’ve developed a hub location strategy, co-locating people based on the type of work they do to improve teamwork, advance innovation and increase efficiency,” Brian Tyler, then-president and chief operating officer at McKesson, said at the time. “Bringing employee groups together in key locations will make McKesson a more streamlined and agile company, complementing our investments and improving operating profit growth for the organization.”

Tyler eventually took the reins as CEO at McKesson.

McKesson joins a wave of California company headquarters relocating to North Texas. In the past few years, Toyota, Kubota Tractor, Charles Schwab, Jamba Juice and dozens of others have made the move from the Golden State to the DFW area.

McKesson will be the 24th Fortune 500 company based in the Dallas-Fort Worth region, according to the Dallas Regional Chamber. DFW is third in the country for the number of Fortune 500 headquarters, behind New York City and Chicago. 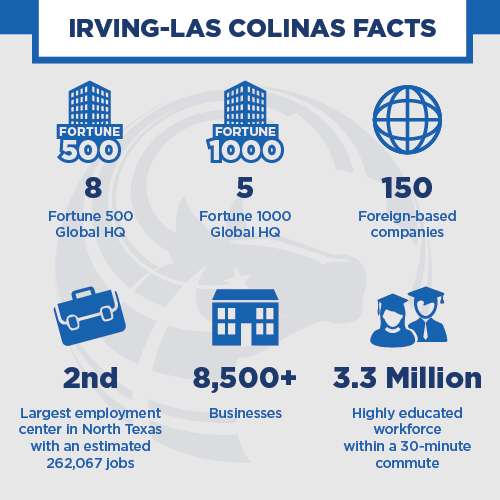 Forty-one of the 121 corporate headquarters that have relocated to DFW since 2010 came from California, according to the Dallas Regional Chamber.

“Recently, we have finalized plans to relocate Core-Mark’s corporate headquarters to the Dallas-Fort Worth area,” CEO Scott McPherson said. “The move will take place during the first half of 2019. The cost of operating out of the San Francisco Bay Area (is) high, and while San Francisco is our longtime home, the business has expanded dramatically over the years.”

Core-Mark, the second-largest distributor to the convenience store industry, had annual sales of $15.7 billion in 2017. The company moved into The Terrace at Solana in Westlake in 2019.

On the talent front, Irving-Las Colinas provides access to 3.3 million skilled workers within a 30-minute drive, according to a Business Facilities report.

Next on the list are Minneapolis, Houston, Hartford, Columbus and San Francisco, which each have roughly 1.5 HQs per 100,000 population.

This article was originally published in Dallas Business Journal and is republished here with permission.

Ready to join now? Click here to become a 5-Star Chamber Member-Investor today!
Fill out the form below for more information.

to Irving, Texas
Watch the Video

Our mission is to build the Armstrong family of companies into the industry’s dominating global supplier of moving, relocation, and logistics services.
Learn More

©2022 Irving-Las Colinas Chamber of Commerce, All Rights Reserved. All Logos and Brands used under license from their respective owners.